6 Female Sailors You Need To Know About 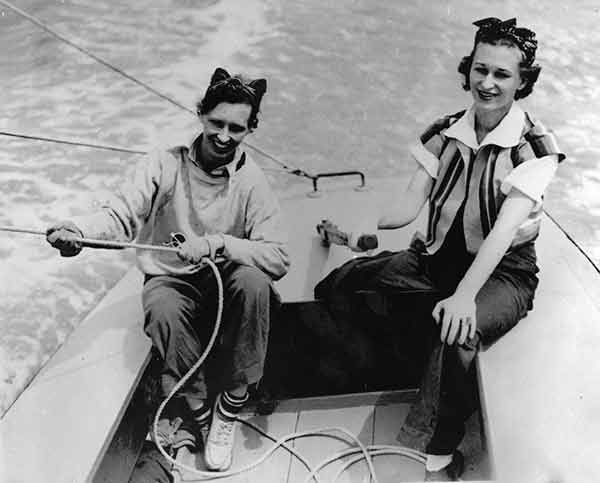 Krystyna, the first woman to circumnavigate the globe left for her journey in February of 1976 in the Canary Islands and returned in April of 1978, a full 401 days of sailing. She sailed on a 32ft sloop named Mazurek.  This Polish sailor has been given the title of “First Lady of the Oceans” and was also inducted into the Explorers Club in New York (a very elite group).

Naomi is the first woman to ever sail around the world by herself via the Cape Horn.  She left Dartmouth on September 9th 1977 and finished on June 8th 1978, a full 272 days out on the water! Naomi decided that she was going to circumnavigate the globe after only 6 weeks of sailing experience! During the expedition she almost lost her mast, capsized and has no radio service for several weeks. In 1979 she was made a Dame Commander of the Order of the British Empire after all her great achievements.

Born in Australia Kay was part of a sailing family who took her out sailing at only a couple weeks old. In June 1988 she became the first woman to single-handedly, non-stop circumnavigate the globe without any help. It took her a total of 189 days on a 37ft yacht named Blackmores First Lady.

“Courage is not having the energy to go on, it’s going on when you do not have the energy”

In 2001 at the age of 24 Ellen raced single-handedly non-stop around the world in the Vendee Globe. Then in 2005 she broke the record, being the fastest person to solo circumnavigate the world.  She finished the 27,354 nautical mile sail in 71 days, 14 hours, 18 minutes and 33 seconds beating the previous record by a whole day.

Shirley is a Scottish sailor as well as an Olympic gold medalist! She is considered to be the first British woman to win medals in two consecutive years of the Olympic Games in 2000 and 2004. She was named Female World Sailor of the Year by the International Sailing Federation in 2000. She has also been awarded the Most Excellent Order of the British Empire (MBE) in 2000 and an Officer of the Order of the British Empire (OBE) in 2005.

“There were moments where I was like, ‘What the hell am I doing out here?’ but I never wanted to stop.”

Laura Dekker had huge dreams as a young child. When she was 13 she stated that she was going to become the youngest person to ever circumnavigate the globe on a solo mission.  However, she had some setbacks before she was able to get on the water. Authorities were not going to allow her to sail the world due to safety, so she fought in court for 10 months. She had a dream and she was not going to give up.  The judges were finally persuaded to allow her departure when they agreed to Laura sailing the world with a bigger boat made with better equipment, as well as her learning first aid and how to deal with sleep deprivation. In August of 2010 Laura set sail and started her journey that finished in 2012 at the age of 16. It was a total of 5,600 nautical miles.