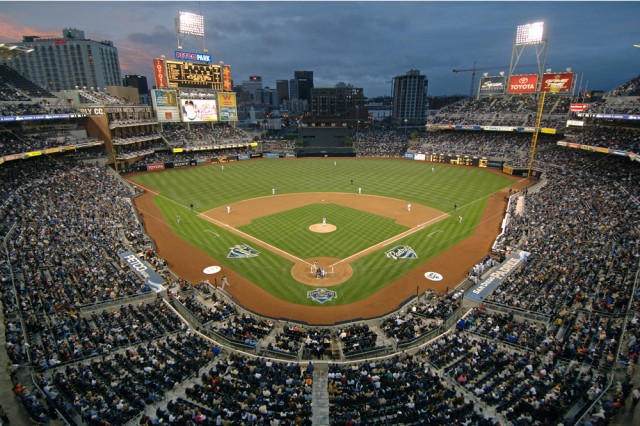 This week’s Feature Friday takes a cue from the fantastic sports events this weekend in highlighting PETCO Park, Home of the San Diego Padres. This baseball stadium and event space sits right in the middle of the historic Gaslamp district of Downtown San Diego.

PETCO Park opened for the 2004 Major League Baseball season with the San Diego Padres beating NorCal rivals the San Francisco Giants in the season opener. The stadium had been under construction for nearly four years and was a major part of the city’s plan to revitalize and modernize San Diego’s downtown neighborhoods.

PETCO Park stands out among many baseball stadiums across the country as an architectural and cultural landmark. The Western Metal Supply Co. building, a historic San Diego building, was left in place during construction and incorporated into the design of the stadium. PETCO Park was awarded the Orchid award for architectural design in 2006. The Park at the Park, a grass area just beyond the field, allows visitors to view games for low cost and participate in festival activities and mini-sports competitions.

Featuring prominently as a major San Diego sports institution, PETCO Park is due to become even more important to San Diego following the loss of the San Diego Chargers football team to Los Angeles. Holiday Bowl organizers are debating hosting the annual college football event, and one of San Diego’s biggest events, at PETCO Park. PETCO Park has played host over the years to many events including concerts, tennis and rugby matches, and San Diego Comic Con events.