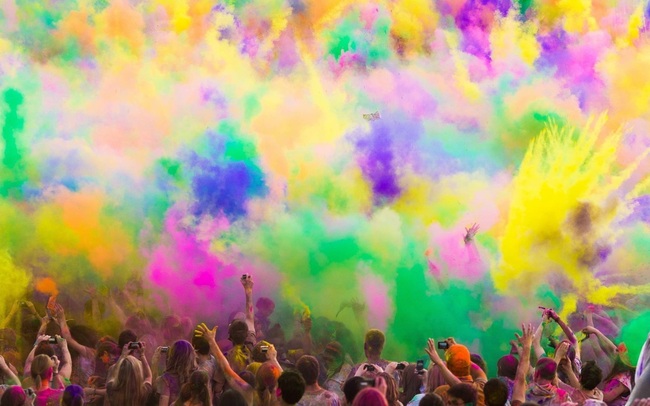 Holi is a Hindu spring festival in India and Nepal. It is an ancient festival, mentioned as far back as the 4th century in the writings of many Hindu poets and historians. Also known as the Festival of Colors and Festival of Love, Holi celebrated the banishment of evil from oneself and that love prevails above all. There are variations of different ceremonies during Holi, but the most popular is the play with colors. Participants gather in designated areas, neighborhoods, districts, and parks and proceed to throw colored powders and water on each other. Anyone and everyone is fair game, friend or stranger, rich or poor, man or woman, children and elders. The frolic and fight with colors occurs in the open streets, open parks, outside temples and buildings. Groups carry drums and other musical instruments, go from place to place, sing and dance. People visit family, friends and foes to throw colored powders on each other, laugh and gossip, then share Holi delicacies, food and drinks. The festival signifies the victory of good over evil, the arrival of spring, end of winter, and for many a festive day to meet others, play and laugh, forget and forgive, and repair broken relationships.

In San Diego, Holi is held at Balboa Park starting around noon. Be sure to dress down or in clothes you don’t mind getting dusted and wet. Dastardly participants often bring squirt guns with colored water and water balloons. You WILL get wet and thoroughly dusted. It’s all in good fun, though, and there is an endless sea of smiles. Afterwards people often go to bars or lunch in Hillcrest, many times with strangers they just met. It’s a good time reflect and remember that it is important to live, laugh, and love.