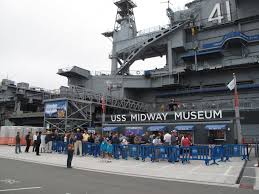 The Midway is now a museum for patrons to explore for only $15!  This vessel was being stored at the Charles P. Howard Terminal in Oakland, California while the new location was being completed. The new location, of course, is the Broadway Pier in downtown San Diego.

In January 2004, the ship was moved to its current location.  The Midway was opened up to the public in June 2004 as a museum.  During the opening year, the USS Midway had almost one million visitors, double what was initially expected.

Come spend this Memorial day exploring the USS Midway; it will be an amazing experience!