Pop Open A Cold One at SD International Beer Fest!

Come out and visit the State’s largest beer festival held at the San Diego Del Mar Fairgrounds! There will be an immense variety of beverages to enjoy, alongside great company! The astounding list comes in at 200+ drinks from all around the world. Mike Hess Brewing will be introducing “Into the Sunset Blood Orange IPA,” a tap created, especially for the 2017 event. There will also be a selection of rare and unique brews from both last year, and new upcoming ones from this. 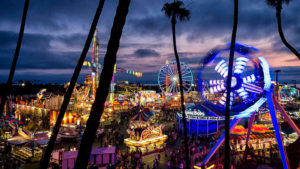 Not only do you get to taste beers from all over the globe, but you also get to learn the steps behind the makings of crafting and brewing. Guests will also be able to participate in fun and games hosted by the festival and Mike Hess Brewing. Anyone is able to compete if interested in putting their drinks to the test! Winner gets their product bought and put up on tap at the Del Mar Races. The fun doesn’t end there, enjoy lounge food and drinks with the VIP upgrade, or go out and have a blast on the fair rides! Don’t miss out!