The Festival of Sail 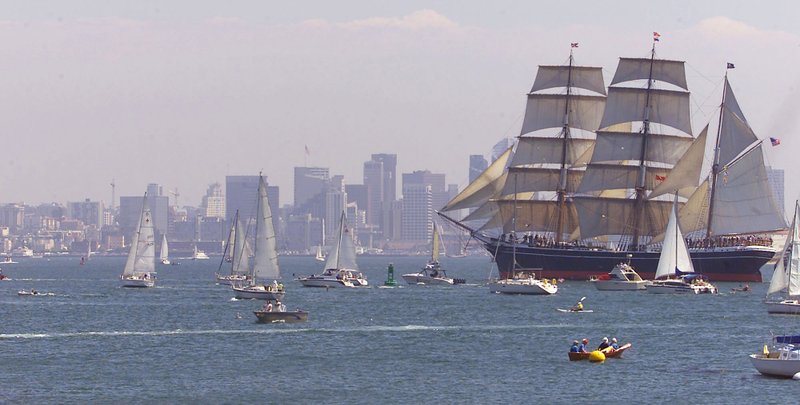 The Festival of Sail is held every year during Labor Day weekend here in San Diego, and it is definitely the event to attend! Hosted by The Maritime Museum of San Diego, there is something fun for everyone.
The event starts off on Friday September 2nd with the Parade of Sail, featuring numerous vessels. The parade will be visible from Shelter Island, Harbor Island, Downtown, and of course from the Maritime museum itself. There are even parade ships that are offering tickets to ride as a passenger during the Parade.
Saturday through Labor Day there will be action packed activities from 9am to 5pm on the Embarcadero, as it is transformed into a nautical theme park to celebrate the occasion. The highlight of the festival will be the mock cannon battles that mimic what it was like out on the water in the 1800’s. Visible from Shelter Island, Harbor Island, Downtown, and from the Embarcadero itself, it is a sight not to be missed! If you book a daytime sail with us during the Festival, you are likely to get up close and personal with those tall sailing vessels and experience the action first hand. For a guaranteed intimate encounter, book a private tour with us!
During the festival, there will be lots to do all throughout the day. There are always a plethora of interesting vendors, food and drinks-even a beer garden. There is also a kids zone to keep the little ones entertained as well, and the San Diego Chicken himself will be making an appearance from 1-3pm on September 4th so have those cameras at the ready! The maritime museum is selling special admission tickets which include admission to all of its museums and exhibits, as well as an opportunity to tour the visiting ships. It even includes entrance into the beer garden and kids zone as well as some special demonstrations.
We’ll see you there!