Where Are The Football Fans? Bolt Up! 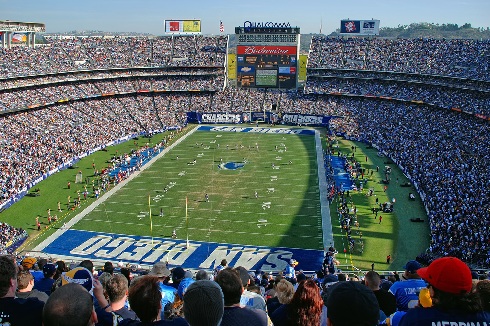 If you are from San Diego, then you just might be a Chargers fan.  Qualcomm Stadium is known to many for housing our very own San Diego Chargers.  There have been talks of the Chargers leaving San Diego and relocating to L.A, but with the Pre-Season already en route, it seems that the Chargers will remain in San Diego for the 2015-2016 season.  Like it or not,  Football is a big part of some peoples lives and not everyone gets the chance to sit in the stands and watch Professional Football right in their own City.  These home games bring a lot of revenue, from the tickets to the merchandise sales every year.  Los Angeles isn’t hours and hours away, but the luxury of driving up Friars Road to get to the stadium to cheer on the local team is something you cant beat.  This Saturday, August 29th, San Diego Chargers (2-0) will be hosting the 2014 Super Bowl Champions, Seattle Seahawks in Pre Season game 3.

For scheduling and ticket information, visit the site  http://espn.go.com/nfl/team/schedule/_/name/sd/san-diego-chargers